Getting a helping hand and giving back 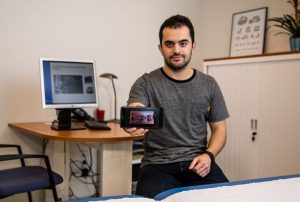 Alberto Gancedo didn’t choose TU Delft so much as he was doing his internship at TU Delft start-up Healthtech. But the university did choose to support him, to allow him to execute his plan, studying microelectronics at Delft University of Technology and working on a super-interesting project at the same time.

Gancedo, originally from Spain, was searching for an internship outside of his home country to complete his bachelor’s degree. Someone he knew from the University of Cantabria, where he was attending, had contact with a start-up company in Delft, called Healthtech B.V. They were looking for an intern to help with the development of an aEEG measurement system. The position fit Gancedo’s skillset and he arrived in Delft in September 2016.

After the completion of his six month internship, he returned to Spain to defend his bachelor’s thesis. Healthtech, however, was interested in having him return to complete the project’s development. As with many start-ups, however, the company was unable to offer Gancedo a paid position. Instead, they said he could return as an intern, provided he was accepted into a master’s programme at TU Delft.

Fortunately, with Gancedo’s academic background, he was accepted into the electrical engineering master’s programme, in the microelectronics track. While this left him with a place to study and a place to work on his research, it didn’t leave him with enough funds to support himself financially. That was where the University Fund Foundation stepped in.

The University Fund Foundation was established in 1925 to promote the interests of the university. Among other projects, they provide students with grants to conduct research at TU Delft. In particular, they search for projects which are exceptional and to support students who are conducting unique research at the university. The Fund had sent out an email to all of the faculties regarding their grant program, which found its way to Gancedo’s section head (Wouter A. Serdijn). He thought Gancedo’s project fit the bill. After completing an application as well as a series of interviews, Gancedo  was informed he’d won the support which made studying at TU Delft possible for him.

The money goes to support his research on an aEEG measuring system. This product aims to allow doctors to test the electrical signals in the brains of newborns. Currently, only babies who have obvious symptoms of brain damage are monitored. The equipment used for these tests is unwieldy and expensive, which makes it unavailable in the hospitals of many developing countries. Gancedo’s device, if it works, would be portable and significantly less expensive which would allow for wider testing and earlier interventions.

Gancedo recognises that his device would mean a lot to doctors and hospitals with insufficient resources. “The funding has been a great opportunity,” he says.

Personal quote:
“Motivation is everything. In my case, being able to work on a project with such a potential impact while improving my skills is what really keeps everything going when I am stuck. My advice is to always try to find a way to keep yourself excited even when doing the smallest of tasks, it really makes a difference.”

Link to the original article on the TU Delft website

This entry was posted in Education, Electronics, General, Neonatology, Understanding the Brain. Bookmark the permalink.

This website uses cookies to improve your experience while you navigate through the website. Out of these, the cookies that are categorized as necessary are stored on your browser as they are essential for the working of basic functionalities of the website. We also use third-party cookies that help us analyze and understand how you use this website. These cookies will be stored in your browser only with your consent. You also have the option to opt-out of these cookies. But opting out of some of these cookies may affect your browsing experience.
Necessary Always Enabled

Any cookies that may not be particularly necessary for the website to function and is used specifically to collect user personal data via analytics, ads, other embedded contents are termed as non-necessary cookies. It is mandatory to procure user consent prior to running these cookies on your website.